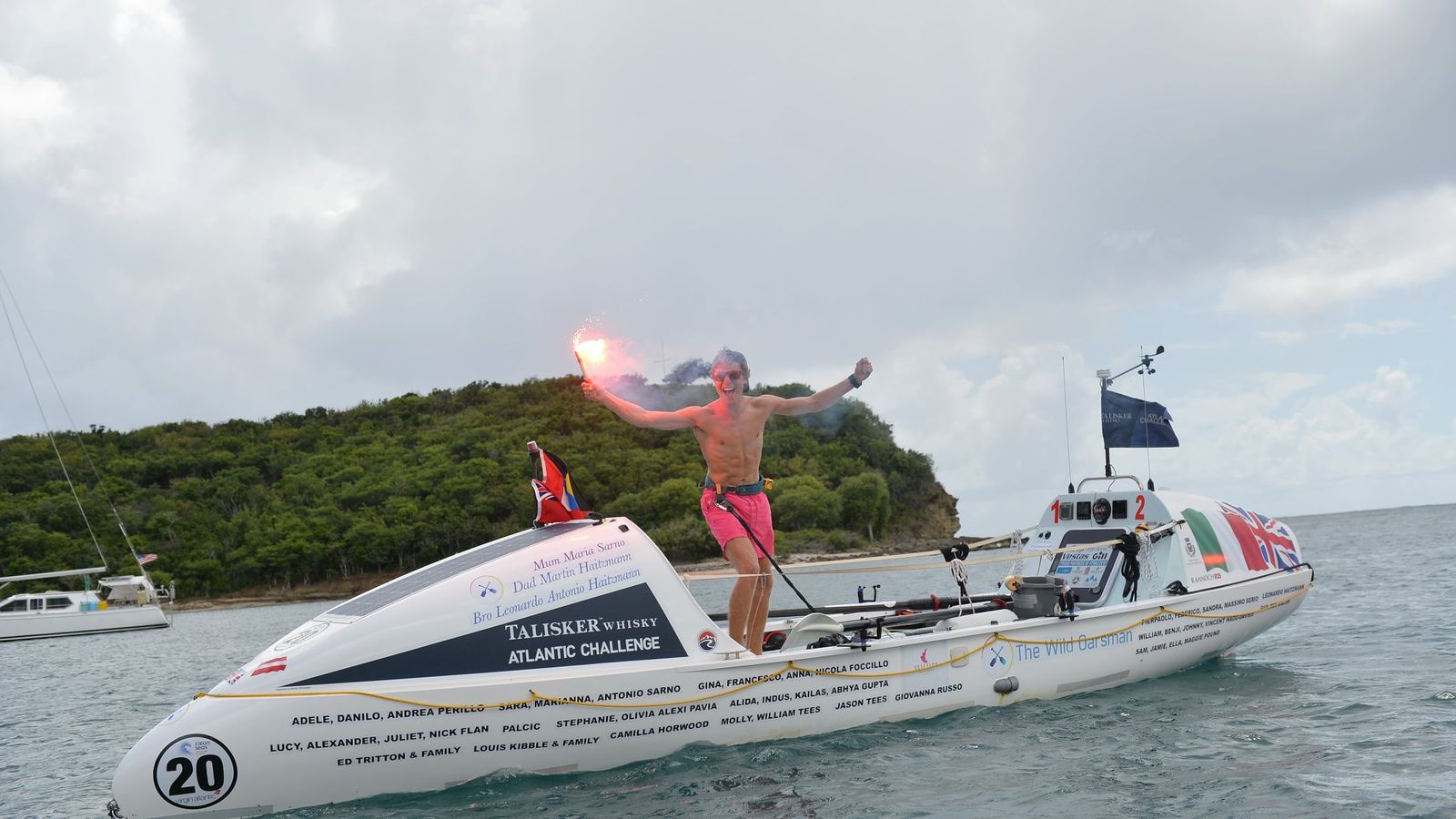 A British teenager has become the youngest person to solo over any of the world's oceans.

Arriving in Antigua on Saturday, the 18-year-old, from Windsor, Berkshire, hit two world records by becoming the youngest person to cross any ocean solo, and the first Austrian – his father is from Austria – roses solo over the Atlantic.

He was also the fastest solo rooker from the 2018 challenge, finishing it for 59 days, eight hours and 22 minutes.

While most young people who left school last summer were thinking of the universities they would come to, the jobs they could get, or where they wanted to travel, Lukas decided he needed a serious challenge.

After growing calm and sailing, he decided to set the university for a year to move across the Atlantic.

His dyslexia was put to the test of trying to fund enough money to buy a specially built rowing boat and everything he would need from food to sunscreen.

He told Sky News: "To be honest, the fundraising was harder for me than the training – I already had the fitness from rowing the last five years.

"I can really challenge myself and think it's important to. My mother wasn't that impressed when I first told her, but I managed to persuade her eventually.

"I didn't realize I should be the youngest person ever to come across an ocean solo until I started making a little digging because others who have done that have broken some records.

"That's not why I did it, but it helped me push me over the line."

Many people who make the Atlantic challenge hallucinate and struggle with loneliness, but Luke said he felt it was quite peaceful.

He would sleep for about five hours in the middle of the night when his boat drifted, then a few hours around lunchtime to get his energy back in today's heat.

"I didn't really talk to myself, it was more to speak my thoughts aloud. My music ran out after a month, so it was a little difficult for the other half.

"I think the hardest part was my water changer broke after 10 days, so I had to use a manual pump to change seawater for drinking water, which was very tiring, but I finally managed to fix it. "

During his almost two months at sea, Lukas said he saw dolphins that he swam with, a whale swimming under his boat, and he saw a turtle and fish.

"I had a storm animal, a kind of bird, followed me for a while, which was really good he kept me company even though he wasn't good at conversation!

"I thought I'd see a lot more, it wasn't as if there were wildlife every single day, which was pretty sad.

"I saw so much pollution, some who had been there for a long time, which was terrible.

"Being out on the ocean in the long run really made me respect it. There's no mess and you really have to have your thoughts on you."

The teenager hopes that his play helps inspire other youngsters to push themselves, whatever they want.

"I'm just a normal child really, I'm not Superman, I really enjoy a challenge and it was a way to really push myself on," he added.

"I hope it shows people that no matter what age you are, you can really do more than you think. If you don't succeed, it doesn't matter, just try and try something else to challenge you if it doesn't. occupation. "

Not one to stay on terra firm for too long, Lukas will spend his time in Antigua to sail with his family before returning to the UK where he wants to go to university.

"After uni we want to see I want to get an education, and actually being on the sea really made me appreciate learning more because I couldn't Google what fish was or why the clouds formed as they were.

"I didn't want to be able to pick up my phone all the time, but actually I was really happy about it because it made you appreciate the ocean."