AMD Radeon VII cards do not have UEFI support

In what seems to be a massive error in quality control of AMD, people who bought the AMD Radeon VII graphics have reported that Your cards do not support UEFIso when they are installed on their machines, the motherboard activates the CSM & # 39;Compatibility Support Module), a component of the UEFI firmware needed to boot the system when there is hardware that is not compatible with UEFI.

Online TechPowerUp He has wanted to confirm the claims and use a hex editor with a Radeon VII card and what they have found has been surprising.

The AMD Radeon VII cards lack UEFI support completely, even though the GOP (Graphics Output Protocol) driver is missing, allowing basic operations with the card before the system starts.

Without UEFI graphics card support, Windows 10 cannot ensure secure startup, and since secure startup is a requirement that the hardware must have the Windows 10 compatibility certification logo right now AMD cannot say that these cards are compatible with Windows 10, at least not before there is an update. 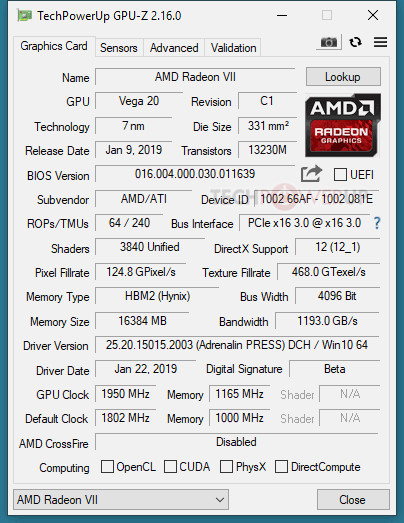 ASRock is the first AMD partner to start a BIOS update to correct the error. And while this update was designed for the Radeon VII Phantom cards, it works on any Radeon VII card so it flashes on the ASRock card or other AMD Radeon VII card that doesn't cause problems.

Recommended: Which graphics card do I buy? The best on the market

You can see the ASRock update file review already has support for UEFIincluding the GOP microcontroller. It is likely that all AMD Radeon VII cards on the market lack UEFI support, but it will not be long until the BIOS of all AMD partners is updated.