Argentine shares on Wall Street collapsed up to 70% in 2018 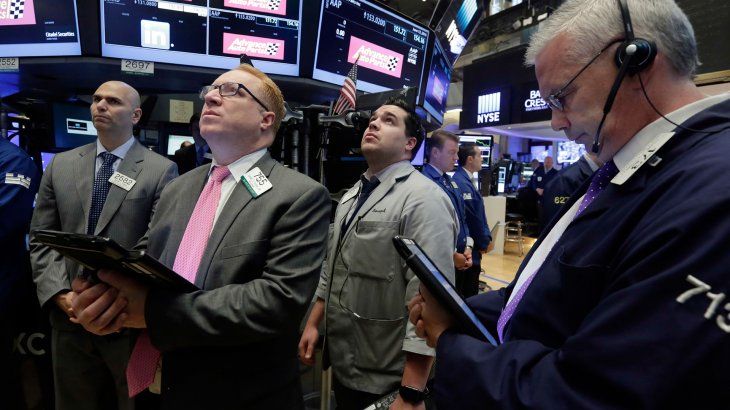 While in December, the most pronounced falls are Despegar (-16.9%), Mercado Libre (-16.8%) and Corporación América (16.9%) according to information from Rava Bursátil.

Meanwhile, the most prominent increases in the month were recorded by Edenor (5.1%) and Loma Negra (4.6%).

The last round of the year, most of the increases closed and highlighted the progress made by Pampa Energía (4.7%), Transportadora de Gas del Sur (5.3%) and Loma Negra (4.5%).

New York Stock Exchange closed Monday's Monday in ascending, but in the global one of the year, it was affected by the rise in interest rates in the US, the global economic downturn and more political uncertainties.

the European exchanges ended Monday trading with small increases, last meeting in 2018, a year where between 10% and 20% collapsed in a context of Brexit, commercial war and fear of growth, as world markets.

the years ended up being "worse than expected" for the marketsDaniel Larrouturou, CEO of Diamond Bleu Gestion, told AFP. "The problems that worried existed, but no one imagined it would cause such a big drop in European indices."

The trade dispute between Chinese and US trade will continue to be one of the greatest fears of investors in 2019, in addition to the "Brexit issue, the economic downturn and the position adopted by central banks", he added.

The US stock indices had a difficult year, at least the European indexes followed.

Wall Street moved with the announcement of the US Federal Reserve (FED), which raised interest rates, increasing the cost of credit to investors, the turmoil of the trade vision between Beijing and Washington, or the development of technological values.

the The fall in the oil price played a role in the development of the actions of the major European groups while the economic values ​​suffered due to low European rates and the struggle between the European Commission and Rome for the Italian budget.

On the other hand, the car manufacturers and industry in the sector were the victims of the fall in demand and the new pollution regulations.

The Eurostoxx 50 European Composite Index ended the year just under 3,000 points and recorded a contraction of almost 15% in twelve months.