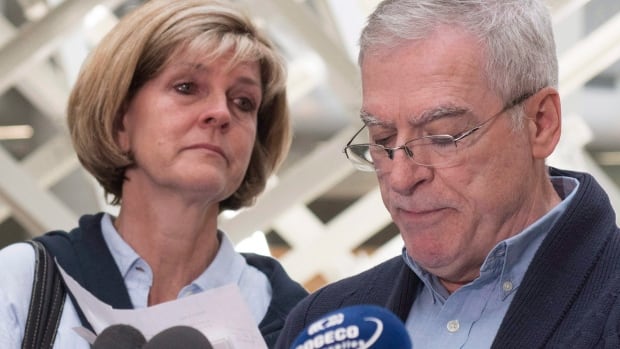 Manon Marchand and Raymond Bissonnette issued an open letter on Monday night, questioning the severity of the smallest 40-year sentence delivered to their son Alexandre Bissonnette on Friday and accusing the crown of encouraging a "desire for revenge" .

On Friday, Alexandre Bissonnette, 29, was sentenced to at least 40 years in prison to kill six men in a Quebec City mosque two years ago. He becomes 67 before he is entitled to seek parole.

Bissonnette's parents point out that the 40-year-old sentence is the heaviest sentence ever imposed in Quebec since the death penalty was abolished in 1976. "We consider this a very serious sentence," they write.

They say the crown's position – which had sought six consecutive periods of 25 years of parole ineligibility – was to bypass the abolition of the death penalty and extinguish all hope of rehabilitation.

"Why refuse even the weakest hope?" they ask.

Bissonnett's parents said last summer when they spoke publicly for the first time that they were unaware before it was too late, when many years of threats and bullying had affected their son's mental health.

On Monday's open letter, they point out that their son suffers from mental and physical bullying "which had devastating effects on his personality."

They say the solution to prevent another tragedy like the one committed by their son is to "not lock anyone up forever, but rather try to understand and prevent bullying better."

Legal experts said the Quebec Superior Court Justice François Huot sentence is likely to be appealed to the Supreme Court.

The Islamic cultural community in Quebec Imam Hassan Guillet expressed sympathy for Alexandre Bissonnett's parents after the verdict was made.

"They are just as corrupt as we are," Guillet said on Friday after seeing them in the courtroom.

Survivors of the Quebec City mosque shooting and the families of the beaten men expressed their disappointment at the victims of children having to revise the case in 40 years when Bissonnette can finally apply for parole.

Read the entire letter from Manon Marchand and Raymond Bissonnette below: