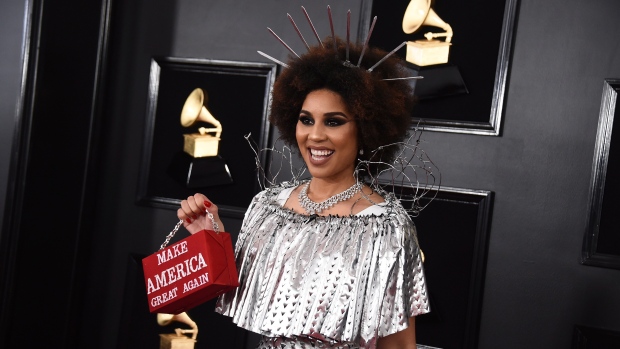 LOS ANGELES – Some supporters of President Donald Trump made their fashion labels on Grammy red carpet.

Villa had a white dress with the black outline of brick and silver threaded tufts on her shoulders as well as wearing a purse with Trump's "Make America Great Again" slogan.

Trump has proposed a controversial border wall between the United States and Mexico.

Desi Designs Couture, designer of Villa's dress, issued a disclaimer on Instagram, saying customers' views, thoughts and opinions are not necessarily the same as the company's.

Rebel had a red, white and blue jacket over white pants inlaid in white boots. The jacket read "Trump" on the back and "Keep America Great" on the front.