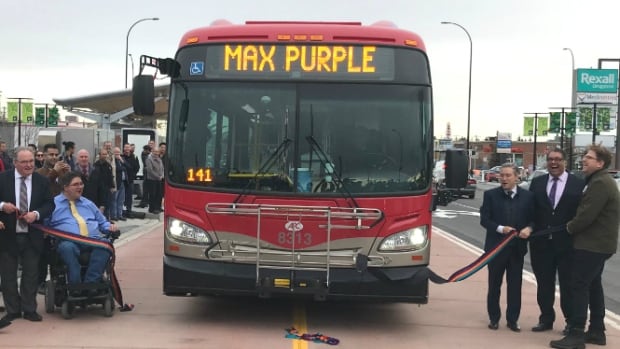 Get ready. Max is just days away.

Politicians for all three levels of government were at hand Thursday on the official band cutting off Calgary's three newest bus fast transit routes.

The North Crosstown Road, which will run from Brentwood to Saddletowne, will be labeled as the Max Orange line.

17th Ave S.E. The BRT route will run between the center and East Hills and be labeled the Max Purple line.

The South Crosstown Road, which will run from Westbrook to Douglas Glen, will be called the Max Teal line.

Mayor Naheed Nenshi said that the new routes will allow transit users to get there they need to go faster and directly.

"I'll cut many bands in my job. I'll open many things. But this is one of the most special for me personally," Nenshi said.

"The key to transit is to link places people live with where they want to go."

The key to transit is to link places people live with where they want to go.– Mayor Naheed Nenshi

"People can get around safely, quickly. We reduce overload. We reduce pollution and we help people get where they need to be if there is work, visiting the family or shopping in a safe and efficient way," says Mason.

The federal government tapped $ 42.5 million through the Public Transit Investment Fund for the BRT routes.

As part of the project, a new transitway of dedicated buses was built along the center of 17th Avenue S.E.

The transit includes three separate bridges carrying the bus routes across the Deerfoot Trail, Bow River and a irrigation channel.

Doug Morgan, chief of Calgary Transit, said that when the final details like landscaping are still complete, the new lines will come into operation next Monday.

"We have already trained on the transit road in the last two and a half weeks. So you had our drivers who came up and down in transit and just watching what's happening. It's been very good," Morgan said.

The head of the International Avenue Business Improvement Area, Alison Karim-McSwiney, said 17th Avenue has had a long-awaited makeover.

It encompasses wider pavements, new lighting and every Max station has been dressed with public art made by artists living in the area.

"I think everyone is absolutely kittled pink and the infrastructure is outstanding. I think people will be very excited to see how everything is revealed," she said.

Several custom-made transit buses have Max Orange, Purple and Teal colors, but most buses on the lines will be regular transit vehicles.

Next Monday marks one of the largest days of transit road changes in the organization's history.

"We have a new website so they can see how their new trip looks and of course we get an army that talks about Calgary Transit representatives on the system, trying to help people get along and discover the new roads and new services, says Morgan.

A fourth Max route, the southwest BRT, remains under construction.

It is expected to be in use this fall next year.

How To Understand When You’ve To Gps Tracking

Getting Regarding Gps Tracking Devices For Trucks

Using A Bicycle Helmet May Be The Good Move