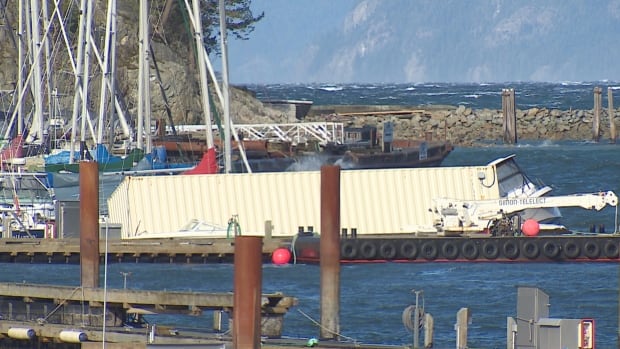 Crews are busy cleaning up West Vancouver, B.C., after heavy winds cracked through a marina on Saturday and immersed in a barge.

Sewells Marina in Horseshoe Bay is littered with waste and is monitored for pollution. Some residents call catastrophic injuries.

"I feel really bad for the other boat owners," said Axel Menzler, one of the lucky few, whose fishing boat was still in one piece after releasing winds ripped through the marina.

The same cannot be said for its neighbors, so he does his best to help. Sunday afternoon he helped try to secure the boats from neighbors who were away or who live elsewhere in the winter.

On Saturday, the wind blew up to 90 km / h over Howe Sound. Big waves crashed into Sewells Marina and dropped a whole barge. Equipment and heavy machinery, including a forklift, tumbled in the water.

A Sewell's Marina Pram shattered due to high winds that caused more rental boats, used oil and fuel drums to go into the water. 12:29

Both were demolished from ports. Some fell, others washed ashore.

On Sunday, the Coast Guard took a barge to temporarily replace a submerged track that protects the marina from several waves.

"I walked around the boats a little and tried to get as much plastic out of the sea as possible, so it won't get into the rest of the bio-environment," says Menzel.

"Of course, we need to look at how we can adapt to this in the future and what needs to be done to ensure the safety of the community and property here," Booth said.

The full extent of the damage is still unclear, but most agree that it is in millions of dollars.