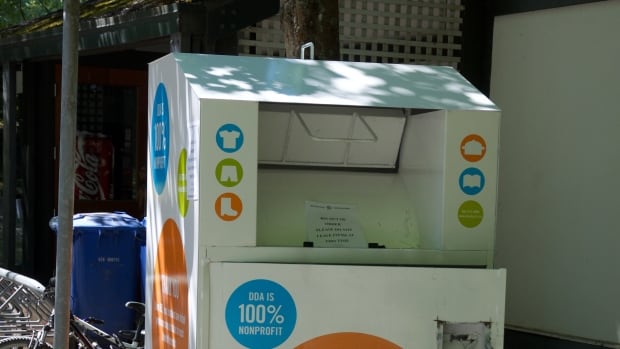 A man is dead after being found in a clothing donation tray in West Vancouver on Sunday morning.

First respondents received a call just before. 8.30 from a free doctor who discovered the man near Ambleside Park at the intersection of 13th Street and Bellevue Avenue, according to Const. Jeff Palmer, spokesman for the West Vancouver Police Department.

Palmer said the man did not react and stuck halfway in the opening of the box. Paramedics tried to revive him, but he was pronounced dead on stage.

Donation bins are found in parking lots and along roadsides across Metro Vancouver. The hat is designed to keep goods inside and protected, but if a person gets caught in the mechanism, they can be cramped and killed.

B.C. Coroners Service examines death, but Palmer said there is no indication of any unfortunate game.

"It looks like it's a very tragic but accidental death," Palmer said.

The family of the 34-year-old Vancouver resident has been informed of his death, but his identity has not been released.

In July, a 30-year-old woman died after wearing a suitcase at Vancouver's West Side, and a man was found dead in Surrey after being caught in a clothing donation container near Guildford in 2016.