Snowfall warning: Another winter wallop headed to the South Coast 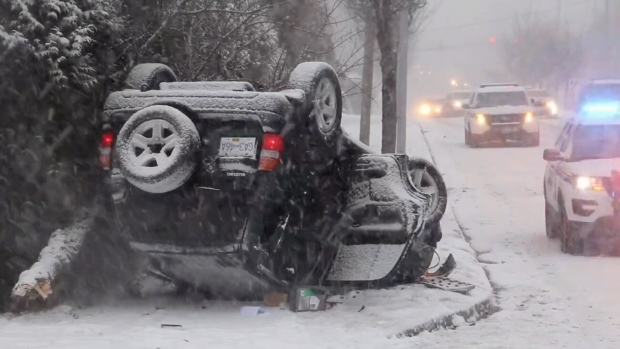 Another burst of winter weather is heading for B.C.'s south coast, where the weekend's snowfall triggered dozens of school closures throughout the region Monday.

Environment Canada has issued new snowfall alerts for much of Metro Vancouver and Fraser Valley, with some areas expected to see another 10-15 centimeters of snow Tuesday morning.

"Another low-pressure center for so many days will give more snow to the south coast from this afternoon and continue until Tuesday," said the weather agency at 04:51.

While the snow hammering Metro Vancouver for hours on Sunday went up in time for Monday morning commuting, it still left slippery conditions on many roads.

Emergency crews were kept busy on Sunday night and overnight dealing with dozens of crashes and fender benders.

There were still many areas covered in compact snow at midnight, despite the city workers' efforts that were in effect during the night salting and plowing the streets.

Surrey tweeted it had "all resources out to fight the snow" and prioritized major routes. The city said 17 tandem and 18 one-ton trucks worked around the clock.

In the Surrey Central area, many cars fought to make it up a small hill on Monday morning.

Highway 1 near the Port Mann bridge was also a challenge. About 5 a.m. Many areas near the bridge were covered with compact snow, making road signs very difficult to see.

While many people chose to take transit, there were also problems with SkyTrain.

TransLink said snow and icy conditions meant that many trains were manually driven in specific areas. It warned passengers to expect delays.

This is a developmental story. Check back for updates all day.