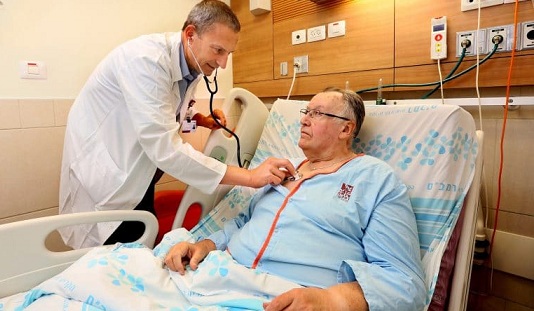 It looks like a diabolo of approx. 12 millimeters, but it serves to lower the pressure in the heart with severe heart failure that does not respond to medication and ends up regularly in the hospital with serious death risk.

The device, which was developed in Israel and tested in Europe in two patients at the German Trias Hospital in Badalona at the Institut del Cor team, is located between the two atria, so a little of the blood passes from the left atrium to the right.

Heart failure when the heart cannot effectively pump the blood entering the lungs to distribute throughout the body causes excessive storage in the left part of the heart, which ends up causing pooling of the lungs or electrical heart failure. own heart muscle.

"The drug allows to lower the pressure and keep the inability to cease, but between 10% and 20% of patients do not respond. The heart is then a pressure cooker and you need to give it a plug. That's what the communication device does" explains Toni Bayès, director of the Institut del Cor de Can Ruti.

The tests in two patients – and in the other five that have been done in Canada, the US and Israel – have worked well and the next step will be a study with many more hospitals and 400 patients from all over the world.. "We need to determine if it really is better than what is now," clarifies the cardiologist.

One of the difficulties with the new treatment is that "we pierce the wall and it breaks dogma in cardiology. Until now, the gaps were closed, we didn't open them. In addition, you have to be very accurate in the location if you move it would be a serious problem or if the step that allows the device was too large or too small, it should pass the right amount of blood from one side to the other, no more or less, "explains Toni Bayès.

Those participating in the Badalona study are experts in heart failure, hemodynamics that open the way to obstructed arteries, electrophysiology, which corrects arrhythmias and anesthetics. The device is inserted with a catheter that reaches the heart through the femur. It passes through the septum between the two atria and the vagina is removed. The two parts of the diabolo open and secure the device so that the blood passes through the hole.

It seems a simple invention to solve a problem so complicated that it is still the first cause of hospitalization and re-entry. "Heart failure has epidemic numbers. We have drastically reduced mortality over a few years, but in Europe there are 10 million people and only in Catalonia, 150,000. We are talking about drowning at the least effort, such as dressing. They are people with poor quality of life. , many do not go home and are at high risk of mortality. "

One of the patients who participated in the trial noted a dramatic improvement in just one week. "I had 10 years of maximum treatment and was drowned to the slightest effort. It is a very disturbing and invalid disease."

Most are diagnosed at about 65 years. Smokers are superfluous and very often they are overweight and consequently likely to be diabetes. Also, the infarction that recovered perfectly, but did not change the life and re-infarction, leaving the heart walls very fragile. Or those who suffer from high blood pressure and end up thickening the heart walls, making it not very flexible. And when there is a lot of circulating sugar, the risk is that small and small vessels are blocked by the organism that creates dysfunctions in the kidney, the heart, the brain.

Under these circumstances, pumping the oxygenated blood from the lungs becomes a difficult and ineffective task to distribute it throughout the body.