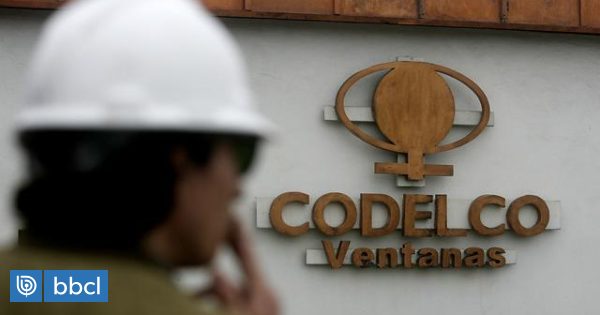 A complaint before the Superintendence of Environment was the one tabled by PPD & # 39; s Senator, Guido Girardi, who asked for a inspection of Codelco Ventanas Division by the emission of sulfur dioxide recorded in early August.

At the time, the Ministry of the Environment denied that the established standard for daily emissions was exceeded and ruled out that it is a new pollution episode in the Concón, Quintero and Puchuncaví area.

Complaint filed that coincided with four consecutive days off stranding coal on Ventanas beach, condemned by the fishermen themselves, who have had to clean the place.

With this background, Senator Girardi requested work suspension from the Codelco Ventanas Division.

Meanwhile, this Friday was published in the Official Journal on control program for the area the one who instructs the state organisms to carry out the monitoring to deal with critical episodes of environmental pollution.

Front Vice President and Chairman of the Environment Committee Felix González said it is required Increase requirements of pollutant emissions.

Environment Minister Carolina Schmidt said it was achieved reduce pollution episodes by 46% of sulfur dioxide in the area since the implementation of the decontamination plan.

From the company, Codelco Ventanas responded to the senator's statement, ensuring that they complied with all the legal provisions required by them.

"In recent years, the company has made the largest environmental investment in the sector with the construction of 13 projects and an associated amount that exceeded $ 159 million since 2010," the company said in a statement.

Codelco adds that according to recent figures from the Ministry of the Environment, SO2 peaks fell by 46% during the first half of this year compared to the same period last year.

The company's statement is available below: