Feng Xiaogang, who had repeatedly ravaged the pirates, smashed a bowl he had postponed in the winter solstice (22) and was identified as pirated by the @ Australian music channel.

Yesterday was the winter solstice, Feng Xiaogang took pictures with Wei Fan at Weibo, and the two men drank and ate dumplings. The atmosphere was very warm.

Feng Xiaogang was very good, drinking a little wine and listening to the symphony: "Listen to Beethoven's" Destiny ", Lao Chai's" 1812 "."

It is this seemingly high CD that causes problems.

@Austria Music Channel After reading the image, identify it as pirated …

@Austria Music Channel's introduction to Weibo is "classic music media dedicated to the promotion and development of classical music in the Chinese region." The Weibo number also explained in detail why Feng's CD is pirated: 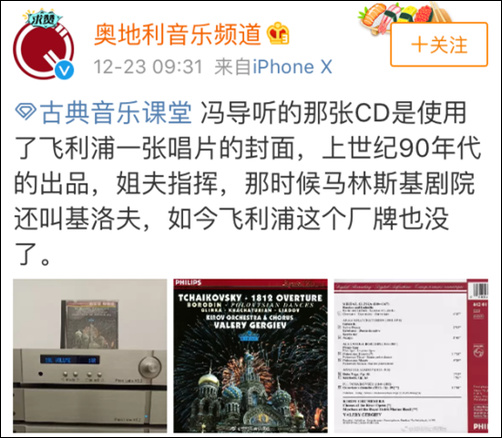 The CD that Feng Xiaogang had postponed was based on covers produced by Philips in 1994.

And Feng Xiaogang's "Super Thunder Fever Disc" CD, although the cover image is the same as the original version of St. St. Petersburg's Resurrection Cathedral, but the accompanying songs are quite different.

In addition to Tchaikovsky's "1812 Overture", the second music from Feng Xiaogang's version is the same as the original version. His version also includes: Beethoven's Symphony of Destiny, Chopin's "Piano Concerto No. 1" in E minor. "Mozart's" Sixth Country Symphony "(Mozart's Symphony No.6 Pastoral), Strauss's" Explosion Polka "and so on.

Not only are the songs different, but they also lack:

"The sixth pastoral symphony" is Beethoven's work. When it came to Feng Xiaogang, the "Mozart symohony No.6 pastoral" became;

Strauss "Explosion Polka" in English was also mistakenly written as "Explosin's Polka", and even Beethoven's name "Beethoven" was mistakenly made "Beethover" …

After this check, there is no doubt that the pirated CD is …

Because his films are often aimed at pirates, Feng Xiaogang has repeatedly publicly expressed his hatred of pirates.

Ten years ago, Feng Xiaogang was controversial because of a "look at the pirated pigs and dogs." In 2008, he clarified on CCTV that his words were misunderstood by the media. What he meant to express was that the price and time were not the causes of piracy.

In 2012, Feng Xiaogang made a big effort at a press conference. "I've been raped by pirates at countless times. Now they're still X, let's let them X, but we're all X."

He also repeatedly reiterated his thoughts on combating piracy and protecting originality on Weibo: