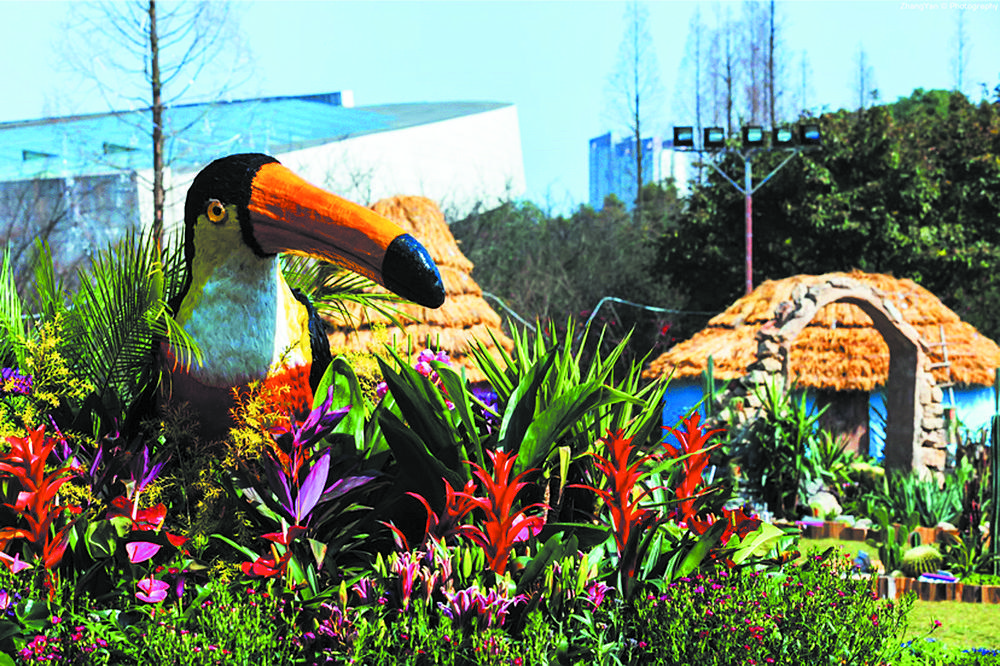 After the popular New Year's exhibition, "Maya's World: Los Angeles County Art Museum's collection of ancient Mayan art exhibitions" fully mobilized the enthusiasm of the Chengdu people, the Spring Festival of the Golden Sands Museum – 2019 Sands Sun Festival Also great opening. Since the opening of the festival on 3 February, a number of exciting activities such as the Lantern Festival, the romantic flower market and the performance of the performance have also been in full swing. This year, Jinsha Flower Market is very different from previous years. Yan Yanyang shines high. Yesterday, the reporter came to Jinsha Flower Market to see what happened.

The annual Sun Festival, hosted by Jinsha Site Museum, combines world civilization with ancient civilizations to create the most international spring festival festival in Chengdu. Through the violent Mayan civilization exhibition, the 2019 Sands Sun Festival took us to remote Mexico.

At the entrance to the flower market there is a large arch made of the Mexican people's flowers, the colorful dahlia filled with colorful and festive. Three flamingos from the Gulf of Mexico ticket are dotted around, bringing the open-minded, eerie youthful enthusiasm to this amazing Mexican garden.

After entering the garden, the audience set foot on the trip to Mexico's world heritage. There is a landscape in the garden that looks familiar as if the little protagonist Miguel in the animated movie "The Dream of Dreams" has his favorite guitar, the straw hat he likes when he plays the piano and the famous Mexican day for the dead. From the animation to the real world. This group of landscapes consists of giant straw hats, guitars and undead festivals. It is accompanied by the warm and cheerful Mexican live music Mariachi fluttering, like the modern Mexican character, lively, warm and cheerful. According to the staff, during the Sun Festival there was a small 30 minute performance every day at. 11.00, 14.00, 15.00 and 16.00, and a concert was held in the garden.

After experiencing Mexico's world heritage, the audience began a natural journey in Mexico –

In the theme area of ​​Mexico's natural landscape is a large piece of yellow sand "grown up" with Mexican national flowers – all kinds of cactus, the largest of which is 4 meters in size, known as the measuring scale! Sisal, agave, tyrant whip, Jin Hu, keel flower, coral, green sandalwood, pocket coconut, Melaleuca, Australian banana, paradise bird and other rare vegetation scattered, dotted in this mini desert, to Chengdu Come to the rare outdoor desert landscape. Many tourists take pictures here.

The same natural theme as the desert landscape and this extended version of toucan. It is not only one of the most beautiful animals in the rainforest of Central and South America, but also an important role in the Mayan-creating mythology "Popol." It is also part of the thriving avatar that stands in the "tropical jungle" of shrubs, green plants and flowers, vivid.

Such a refined and beautiful garden, even the service facilities are very brilliant. Five highly-crafted colorful colorful chairs are scattered among the trees. For the Mexican Maya, art life, ceramics, weaving and textiles are all at that time. (Reporter Wang Jia picture with law of Jinsha Site Museum)