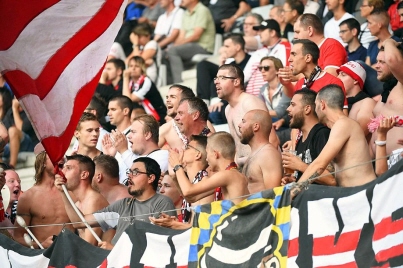 The match on the 4th day of Ligue 2 between Nancy and Le Mans (2-1) was interrupted by the referee due to songs offended by the Professional Football League (LFP) on Friday at Marcel-Picot Stadium.

A few minutes from halftime, and while the stadium reviewer had issued a warning to the fans, insulting songs addressed to the National League ("The League, you bugger") came out of the stands.

Referee Mehdi Mokhtari decided to interrupt the game, but it usually resumed about a minute later after the Nancy players asked their fans to relax.

The leaders of the ASNL were summoned by the Professional Football League delegation Alain Marseille at the break.

ASNL President Jean-Michel Roussier "virulently condemned all acts or homophobic remarks. I will again meet supporters who subject us to severe penalties, although I do not know the scales yet. Inform, but I understand the decision of the delegate who will apply the regulation. Subsequently, football is not meant to tackle society's problems and football need not be fingered. It is not us, ASNL, who educates. It is found in Nancy, Metz, as in many stadiums in France, the same acts, and it is regrettable, he told the East Republican.

Recently, she had asked LFP for more firmness about offending songs at the stadiums. She had recalled the possibility of interrupting matches in the case of homophobic crime.

State Secretary for Gender Equality Marlène Schiappa also responded to the incident on Twitter, speaking on "homophobic" remarks: "Congratulations to Judge Mehdi Mokhtari for bravely interrupting the fight against homophobic songs sung at Nancy-Le Mans as permitted by the rules Football is a exciting sport and must remain so for everyone. "