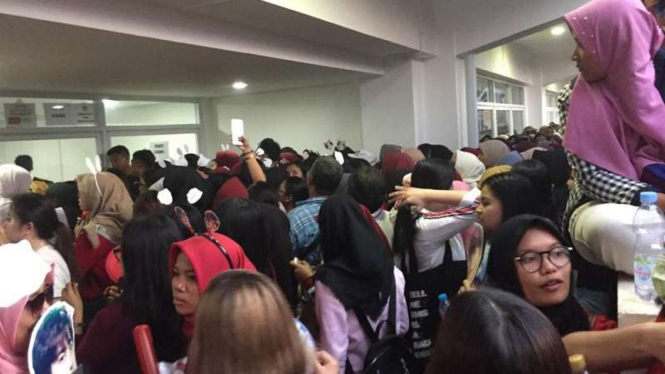 The arrival of seven male members, namely B.I, Bobby, Jinhwan, Junhoe, Yunhyeong, Donghyuk and Chanwoo were welcomed by fans in the country.

The lucky fans have bought their tickets in advance to be able to watch the idol. In addition, there are also fans who are not forced to buy tickets because the tickets sold online are up.

Fans who could not buy tickets were still present at the Tennis Indoor Senayan concert area to buy tickets directly to the ticket page.

The unfortunate fate, however, was the iKONIC who arrived early in the morning until morning early morning to queue for tickets on site promoted by the promoter.

The promised tickets are actually already gone and promoters do not provide a large number of tickets in place.

This really makes the fans from the early hours feeling disappointed, sad and crying. In fact, fans who received tickets had been worried and encouraging responsibility from Mecima or Indotix.

A fan that succeeded in the interview admitted that he had tried to buy tickets long ago via Indotix web, but they claimed that the site had a problem.

"From the beginning of the purchase of tickets, Indotix can not be reached at all. It's from August 10. It has been opened but can not be clicked," says a Bandung fan who would not be named.

"There was a long line up to the building round from 4 o'clock. He said there was an OTS, but it turned out he was sold. Really disappointed, sorry to cry," said the fan.

Enthusiasts who did not get tickets even had time to buy to brokers, but the offered price was unreasonable at Rp7 million to Rp10 million. The fans were not forced to buy tickets.

In addition, there were also many fans coming from east Java and other areas that were willing to come to Jakarta to get tickets to On The Spot, but suddenly this was not.

After the accident had hit the side of gray, the fans finally got up and backed off.