They pay posthumous tribute to Fernando del Paso in art 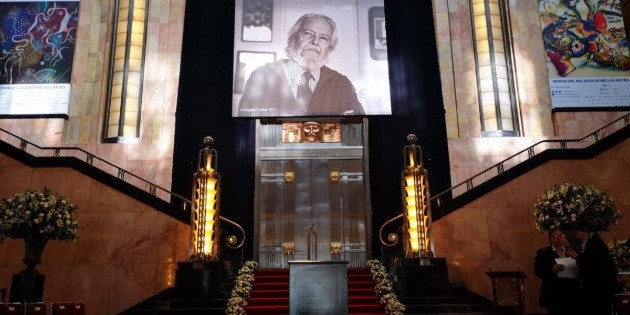 A large-scale portrait of Fernando del Paso, flower arrangements adjacent to the urn containing its remains, and a long series of sculptures initiated by the Minister of Culture María Cristina García Cepeda, was the scene that this afternoon brought to the Palace of Fine Arts during the National tribute to academics, diplomat and writer.

Director of the National Institute of Fine Arts (INBA), Lidia Camacho, his friends Xavier author Quirarte and Cristina Pacheco and their children Adriana, Paulina and Alejandro del Paso Gordillo, and his widow Socorro. With the sacred and funeral music of chamber music ensemble "Ramos" as background, García Cepeda gave the first action.

"Fernando del Paso devoted his life to understanding with his eyes what reason for words, his books are an inexplicable treasure that enlightens us, he was a great writer, engaged in the word and his trade, seduced by telling stories and conquered by culture ", said the head of the country's cultural policy to relatives, friends and colleagues of the author, who died on Wednesday, November 14 in Guadalajara.

She mentioned convinced that her work is like the river that updates the imagination in the literature of the sea. "He lit a great guy to rewrite man's lusts, common to all societies and all the time." Then he talked with his leftovers: "Dear Fernando, you always knew what to do, you were a traveler with a Renaissance spirit, with humor, which is a virtue for culture".

Adriana del Paso did not speak much. "They would win me tears," he said, and he just thanked the samples of support. Paulina del Paso, recalled that her father exceeded a fatal cancer 50 years ago, who lived intensively. Then he read a fragment of his father's work; Alejandro de Paso, meanwhile, excited to be in the Palace of Fine Arts, "National Heritage, Same as My Father's Work".

Fernando is faithful to the earth he was before us. Today, we are poorer and orphans, but also thanks to him richer and more invincible

Dr Vicente Quirarte explained that the Palace of Fine Arts is the last station where deserving honors are given to those who have most known how to express collective desires. "Today, we are welcomed by his fiery marble that Fernando del Paso has done, and words he has given us with unprecedented glares to make a work of art and a passionate adventure every day".

In the afternoon, the Palace of Fine Arts is in mourning to be the stage for posthumous tribute to the novelist, academic and diplomat. The letters, the literary pillar of Mexico in the twentieth century, left a legacy based on his famous texts "José Trigo" (1966), "Palinuro de México" (1977) and "Noticias del Imperio (1987).

That Quirarte, Fernando del Paso showed his gratitude, admiration, respect and affection for those who gave lavish houses to the language and urged us to keep them in time and accident. "Fernando is loyal to the world, as he once was to us, today we are poorer and orphans, but also thanks to him richer and more invincible," said the poet and the academic language of a voice choked with regret.

His words were followed by killing applause from all present, as well as more precious works before the little urn, where the remains of Fernando del Paso rest forever, as Vicente Quirarte cited as sharp as "an example of who builds us when we build".

Finally, the camera group "Ramos" performed more parts of the universal classical repertoire and people from the village approached the ceremony.