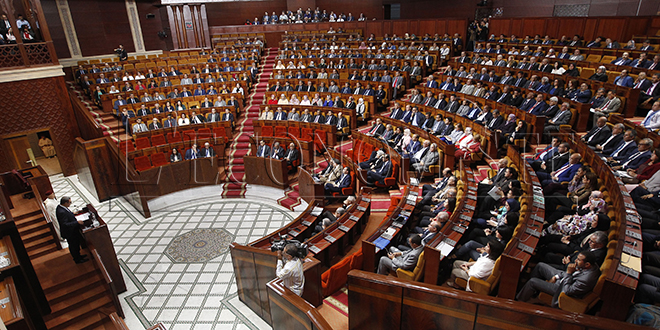 The House of Representatives adopted by majority the draft budget law 2019 (PLF2019), at a plenary session held today. The project was approved by 189 MPs and rejected by 93 others. Earlier this day, the first parliament approved the second part of PLF 2019 by 189 votes to 92. PLF 2019 expects a growth rate of 3.2%, an inflation rate that contained less than 2% and a budget deficit of 3.3%. It also plans to ensure stability in the economic equilibrium by maintaining the deficit of 3.3%. This project, prepared in accordance with the Royal Declarations of the Throne, and the Revolution of the King and People, is structured around four main axes aimed at prioritizing social policy, especially in education, health and employment, and stimulating private investment through the rapid adoption of the new the investment charter, the implementation of the reform of regional investment centers, the improvement of the business environment and support for businesses, especially small and medium-sized enterprises.

PLF 2019 has a budget of 68 billion dirham (MMDH) for education, including 2.1 billion dirham for the Tayssir program and 4 billion in commitment appropriations. In addition, a budget of 28 MMDH is reserved for health care, including 7 billion in the form of building and equipment building facilities in Rabat, Tangier, Agadir, Marrakech and Oujda, in addition to creating 4000 budget lines. The project will be submitted to the council for consideration and approval. In accordance with Article 49 of Organic Law No 130.13 on the Budget Act, the other department must decide on the draft within 22 days of submission.