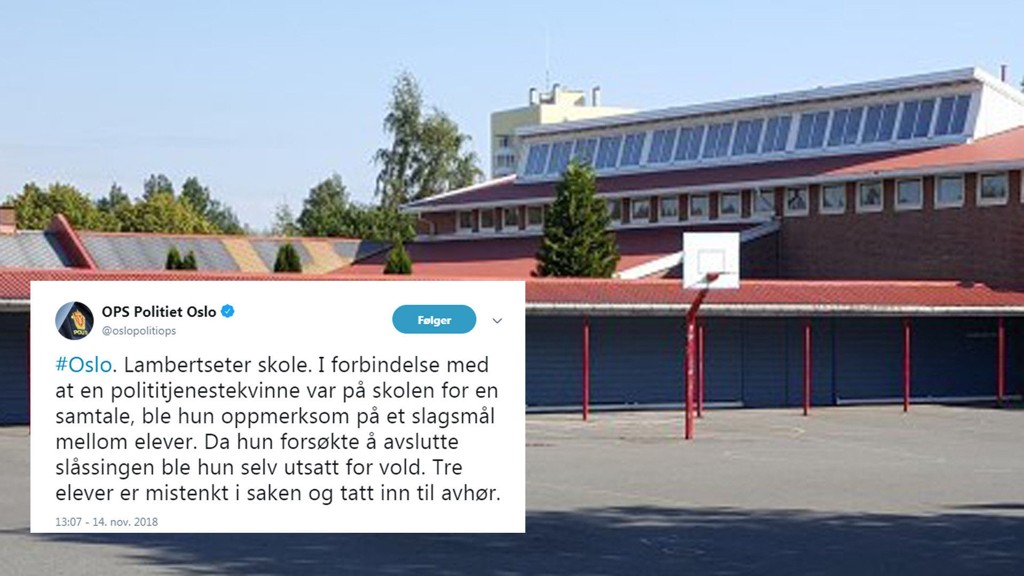 Three students suspected of the case, the police report.

A police on Wednesday at Lambertseter School in Oslo for a conversation was subjected to violence.

The woman became aware of a struggle between the students. When she tried to end the fighting, she was subjected to violence, wrote the police on Twitter.

– Three students suspected of the matter and being questioned, police report.

After the incident, the police were driven to the emergency for follow-up. She is not seriously injured.

To the newspaper, the police reported that the battles she became aware of occurred outside a room where the woman had a conversation with a student. That's when she went out and tried to stop the battles she attacked. One of the students should have taken a crimes on the woman, according to the police.

The police moved out with more units to school and gained relatively quick control of the situation. The three students suspected of the case are two boys at the age of 14 and a 15 year old boy. Everyone is school students.

The police are investigating the matter further.

Read also: – Youth crime was a problem in Oslo long before immigrants arrived

#Oslo. Lambertseter school. When a police was in school for a conversation, she became aware of a struggle between students. When she tried to end the fighting, she was even exposed to violence. Three students are suspected of the matter and questioned.

Similarly, you can get more fresh news and fresh opinions!