Choquehuanca breaks down after I resigned from PPK: I spoke with Vizcarra "from the bottom of my heart" [VIDEO] 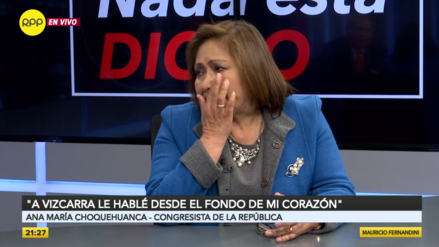 Congress woman Ana Maria Choquehuanca could not help breaking live on Thursday as he spoke about his resignation to the Peruvian government bench of Cambio and his loyalty to the president Martín Vizcarra.

In statements to the program Nothing is said in RPP News, the ungrouped lawmaker said she spoke to the president on Monday about his departure. "I imagine that when I respect him, he would always respect my decisions," he said.

“I'm getting calmer because if there is someone that I have talked to from the bottom of my heart, with the feeling that I have maintained, and with the loyalty that I have to this commitment that I have with Peruvians for Cambio, because it hurts that things have been so, has been with him, because I think that's what it was. "

He said he will remain "loyal" to the executive, respecting the commitment he made to the ruling party. His resignation "has nothing to do with the government line or with President Vizcarra … this is an internal bench issue." "I felt discriminated against", he said.

"I don't want people to think I'm a transfuge, I'm not, and I don't want to go to any bench. I want to remain ungrouped, but always in line with what requires me to be a real person, ”he said in a broken voice.

"Forgive me, but this is a very difficult time for me, but life goes on and we must continue in the same way," he said, wiping his tears with a handkerchief.