Facebook | Cercado de Lima: Subject attacks a woman and the police do nothing | VIDEO | Society 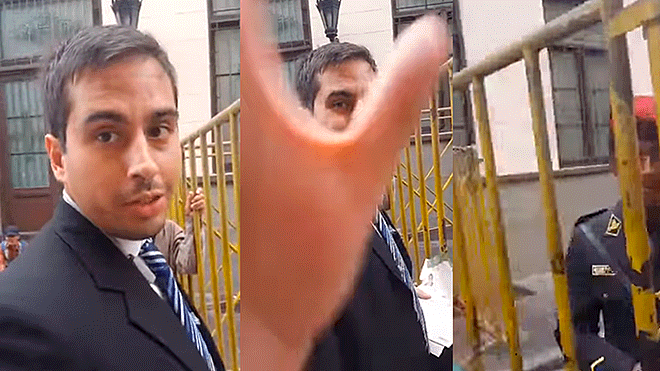 A woman was reported to be attacked by a person in Cercado de Lima, while transferring on Facebook with two people invited to royal lunch between President Martín Vizcarra and King and Queen in Spain.

The real event was held Monday at the government palace. Invitation from the president, along with the first lady, Maribel Díaz, went to Olinda Silvano Inuma de Arias and Silvia Ricopa. In the video, while the women were introduced, a man was infinite.

As seen in the video of Facebook, the subject express does not care about the recording. While the woman holding the camera mocks him for her bad attitude, the buried man raises his right hand to perform a offensive gesture.

In view of this, the woman goes to the police to accuse the man who claims one female aggression, denied by her. The police officer did not know the insult.

Second, the subject made a strong attack on the person who made the recording for Facebook.

The man left the place who threatened to "point a fist" against the woman, who defended despite the attacks from the aggressor and dubbed him as "spoiled" and "rude". The victim also blamed police not to do anything about it or ask for its identification. "That's why they're killing us, that's why they attack us," he said.

Different users of social network They condemned the aggression against the woman who made the transfer.