The winning coalition IDY 2019, the political and intellectual cream that serves Senegal! 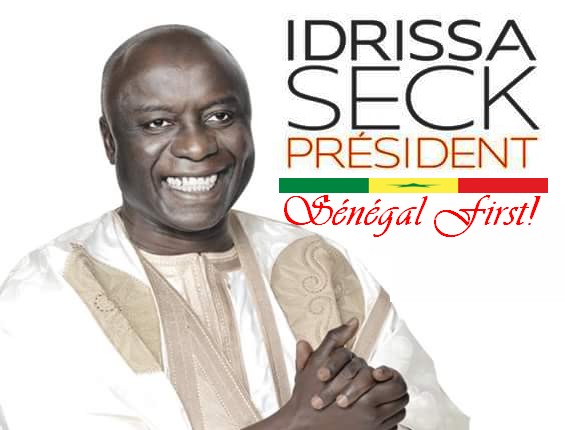 Incomprised, Idrissa had been for many years. Today, the majority of Senegalese seem to understand the true meaning of his political struggle and his patriotic commitment. It has a great ambition for Senegal, an ambition supported by a clear vision and supported by a political project that is both inclusive and plausible. And it was Mandela who just said that "an action that does not follow a clear vision is lost time. While a vision followed by actions can change the world.

With the IDY 2019 coalition, the vision is very clear, and the action will depend on the common will of the Senegalese people, the only one to decide who will preside over their destiny. However, everything suggests that the latter has taken the permanent election in this 2019 presidential election to restore the perfect love that once binds him to the president of Rewmi after fake and ubiquitous rumors were orchestrated orchestrated, transferred to his place of dishonesty and scary opponents. With President Idrissa Seck, it is the moment or never to really regret Senegal in the limited circle of new countries.

The emergence of truth, far from being an intrusive slogan, should rather be the result of a process of deep structural transformation of the main pillars upon which it must rely. It cannot be determined, it is secret! That was what the IDY 2019 coalition understood early on by offering Senegalese a solid programmatic offer, which was defined by national experts in their respective spheres of action, and the smallest penny was paid to a foreign firm so as to reject our development directions.

And it was Professor Ki-Zerbo, who said in the goals of others for an endogenous development of Africa, that "the only fact that 85% of research on Africa is outside Africa, shows that this continent is interrupted and especially of its gray matter ". The IDY 2019 coalition is dependent on local know-how!

Therefore, since the beginning of this presidential campaign, it has attracted politicians, prominent members of the citizen's movement from all sides, but also fellow countrymen who are serious and committed to getting Senegal out of the gap that has killed the current regime since 2012. to President Idrissa Seck in addition to his real skills also comes from his programmatic offerings, through which every leader is concerned about the endogenous development of Senegal & # 39; s; will find there. If the program Idrissa Seck's anchors so much attention, it is precisely because it is the result of a synergy of actions, thoughts and reflections produced by major national specialists who are well aware of the socio-economic realities and cultures of our country and voluntarily committed to put their knowledge and know-how at the service of their home country.

Empiricism has also been a decisive factor in the realization of this program with a clear vision as a result of good knowledge of the terrain, suffering and, in particular, the major concerns of Senegalese people from within and diaspora. The adoption of a holistic approach and a participatory approach makes this program a credible picture of Senegal's situation with concrete indicators and concrete, feasible, innovative proposals, and in particular with achievable short, medium and long-term goals. term.

The IDY 2019 Coalition Program ensures and calms with a comprehensive offer that does not leave any sector stranded. That's what makes the programmatic offerings of President Idrissa Seck, one of the most relevant of all those so far published by the other candidates, for whom, of course, the problems of listening to them in depth. This is undoubtedly what facilitates the reunification of all these leaders around this ambitious offer, even more crucial to our recent commitments.

Such an avalanche of skill that is so diverse and varied can only shake the opponent who is aware that he has already lost power, as the Senegalese, in their overwhelming majority, carry and carry these leaders, if GOD wants theirs elections on President Idrissa Seck on the evening of February 24, 2019 as evidenced by this popular enthusiasm for him on each of his excursions. There is no need to ferry buses and other buses from the depths of Fouladou to fill the Kolda stadium. A natural and spontaneous popular jubilation greets our candidate everywhere he goes, for simply in this presidential election in 2019, our coalition embodies hope for an entire people. A people deliberately deceived, gagged and stifled for 12 years by President Macky Sall's unpopular regime.

One of the greatest forces in this coalition has been to polarize the majority of the opposition with respect for broken leadership. There are promising talents who are always known for their patriotism, their political and / or professional curriculum, which counts Senegal today and tomorrow as Cheikh Bamba Dièye FSD / BJ, Malick Gackou from the Grand Party, Thierno Bokoum from the AGIR movement, Captain Dièye of the NIT movement, Ababacar Diop from FDS among others. Alongside these pillars of talent, whose moral and intellectual truth is unmistakable, there are also brave struggles who have always shown an immeasurable commitment to the successful consolidation of democratic gains from democracy. Senegal achieved after a long process of maturing a community's project based on strong consensus. Pr. Malick Ndiaye, former head of the sociology department at Cheikh Anta Diop University of Dakar, a brilliant intellectual and open-minded, quickly selected candidate Idrissa Seck.

IDY 2019 is also a sum of experience with the best public figures that have already proved themselves and in most manners in the light of everyone. Dakar Deputy and Coordinator of Takhawu Senegal Khalifa Sall, Former Prime Minister Adjibou Soumaré, Former Mayor of Dakar and President of the National Assembly Pape Diop, etc. is now ready to put all their expertise into Senegal's exclusive service. It is also necessary to count other vital forces composed of many citizen movements, individual personalities willing to voluntarily serve their country, come from different horizons and share the political project proposed by the candidate Idrissa Seck. This diversity of competent, strict, voluntary, committed and related actors is supported by a pool of young intellectuals with different disciplinary backgrounds, but sufficiently aware of the significant role they can play in bringing such a candidate to the top. Idrissa Seck is a gift from God to Senegal because of her immense intellectual abilities and especially her vast know-how in various fields, all of which are pampered with unprecedented virtue.

He has a clear view of where he will lead Senegal and the most skeptical enough to look at his excellent program to realize such evidence. It is not for his beautiful eyes that all these talented leaders today surround him even less for political calculations. No! It is precisely because they know that he is the situation for man, that they gathered around a program carried by a charismatic leader and above all hard-working. In the year 2019, Senegal will never miss history's trains by wearing the one with the best profile among the candidates to lead its state.
Virage, we're taking it now.