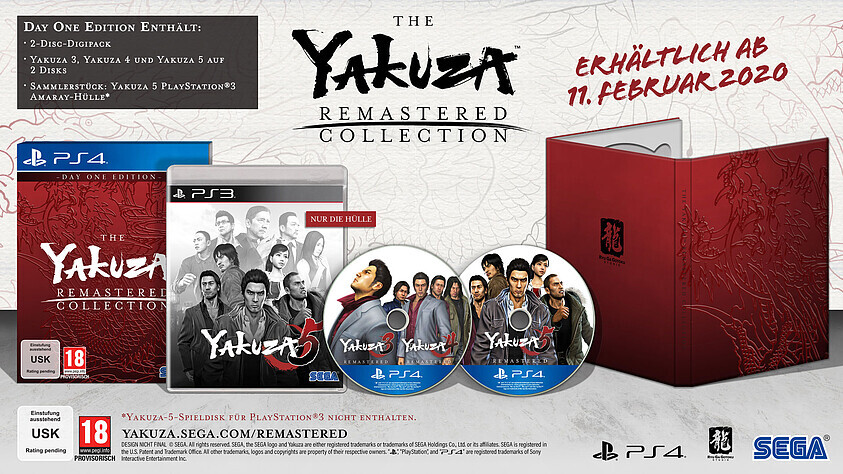 "The Yakuza Remastered Collection" is confirmed for the West. "Yakuza 3" is available today for the PlayStation 4.

"The Yakuza Remastered Collection" is virtually digital for the PlayStation 4 available in the West and includes "Yakuza 3", "Yakuza 4" and "Yakuza 5". 1080p with 60 frames per second was offered. "Yakuza 3" can be downloaded and played immediately after the purchase of the collection. "Yakuza 4" and "Yakuza 5" were released on October 29, 2019 respectively. available on February 11, 2020.

A limited, physical version of "The Yakuza Remastered Collection: Day One Edition" will appear on February 11, 2020 for the PlayStation 4 and includes "Yakuza 3", "Yakuza 4" as well as "Yakuza 5" on two data carriers in a randomly rotating collector's box , which is embellished with Kiryus Dragon Tattoo. "Yakuza 5 will be the West's first available in a physical format. The collection also contains a real Yakuza 5 PS3 box. Five years after the game's release, serial collectors may finally fill the gap in your library" since SEGA.

Collection Description: "The Yakuza Remastered Collection is far removed from a typical console port. In addition to graphics and performance enhancements (720p> 1080p at 30> 60fps), all three games have undergone a rigorous localization process. Revised, revised or even rewritten in some cases. Content that was previously missing from the western publications of Yakuza 3, 4 and 5 has been re-integrated into the Yakuza Remastered Collection. "

SEGA adds: "In Yakuza 3, the mini-games Mahjong, Shogi, Massage Parlor and the ever-beloved cabaret as well as a collection of Nebenquests from the original release are available! an on-the-map subtitle tracker and possibility, while switching between Karaoke mini games between English and Japanese texts. "