Agriculture and agriculture The fish is bitten in Thailand.

November 6, 2018 Krisada Boonrat, Minister for Agriculture and Cooperatives The Ministry of Agriculture and Co-operation is pleased to announce that the Ministry of Agriculture and Co-operatives proposes that the fish bite as national fish. The Ministry of Fisheries has notified the National Identity Committee. Fish bites originate in Thailand and have a unique species. And in the past. Thailand eats a lot of fish and sees in the sport. Has long been associated with Thailand. While the economic emergence of many species of fish. Therefore, it is proposed to become a national aquatic animal in the next step. The Identity Board will collect comments submitted to the General Secretariat. Suggest the cabinet to consider further. 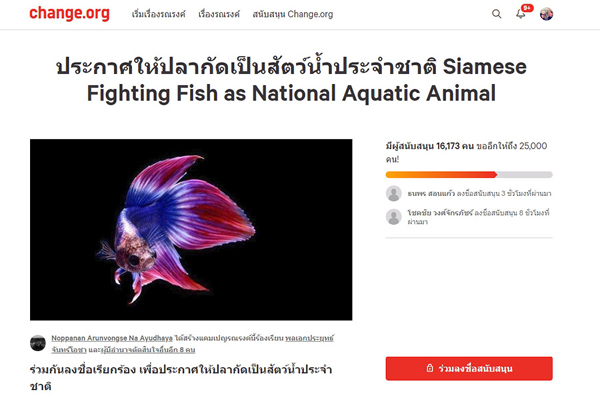 when www.change.org Campaigns were created to sign. To announce that pieces of fish are a national aquatic life. The creators of the campaign say that Betta Splendens or people in the world know each other well known as Siamese Fighting Fish or Siamese Betta is a Thai fish. This is unique. Thai people have been bitten by fish for games, but now Thai people and people around the world have a beautiful fish. In genetic terms. All species of bats in the world are derived from the same species as Thai Mullet. Only when the right combination of rhythm. A beautiful amount of bite fish, which is a genetic feature hidden in the original Thai fish. It will look beautiful. Become a variety of fish species at the end …

However, on December 8, 2560, National Identity Board Wissanu Krea-ngam, Deputy Prime Minister Ministry of Fisheries has refused the offer. Ministry of Agriculture and Cooperative Fish is not declared as a national aquatic species. For that reason the offer is There is no connection to the national identity. As it is Thailand risk losing its national identity in the international arena. Bitten fish is a water fish in Thailand for hundreds of years. They also lose the financial opportunity. Currently, Thai farmers export fish to sell to overseas worth billions of baht each.

So at this time, to show pride in small bites. Our countrymen There have been Thai people since their ancestors. And the whole world accepts unique Thai fish from the past to the present. Let's invite the Thai people. Common Sign The Government and the National Identity Committee announce that fish bites are Thailand's national fish.