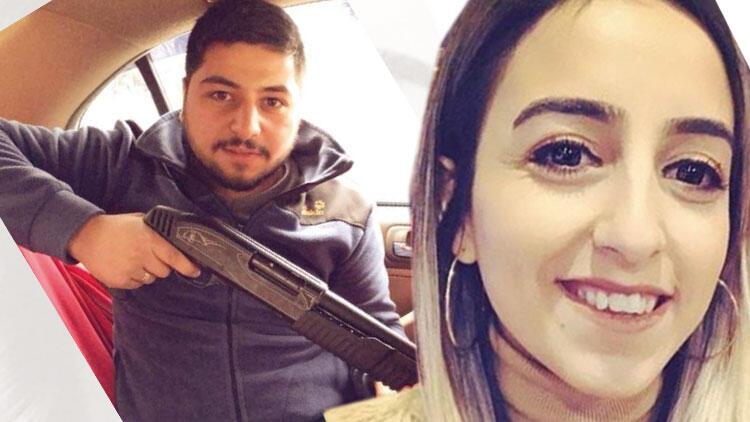 According to information received, 4 months ago, Eren Erdogan (22), and married his wife, Fatma Erdogan because of violence, left the house because of his family settled. Fatma Erdogan, last night, went to visit his friends at his former workplace in Sefaköy. Eren Erdogan's wife was divorce while coming back to work from the young woman's path, was cut.

Eren Erdoğan, who decided to suspend him, discussed with Fatma Erdogan for a while. Then he shot the young woman with a gun to his head. Eren Erdogan car wanders for hours with the body, went to his family told the situation. When Erdoğan convinced his family and relatives, he surrendered to Halkalı Police Station with the body. Eren Erdogan was police officers sent to prison after being arrested by the court.

"AGAIN WILL BE BACK

She said she was constantly threatened by her spouse and her patience sir. Sharar Alyar.

Alyar, "My daughter's workplace one day they called us," Eren came up with this girl, "they said, said the press. The second day she came and waved in the neighborhood and shot a gun and threatened me. If I lived 4 more months "I would have taken my funeral out of the house. The second time I decided to suspend. I ask my state for help. From yesterday. How can I do this? Istiy How can a man do this?"

My daughter saw him as he trembled. Yesterday he forced him all the way into his car. He threatened me. "I want to kill your mother," he said. My child sacrificed himself for not approaching me. They were not normal people. He breaks my daughter's work. He takes him to his house. He takes two knives. She puts her mother and her guests in the house. It locks the door from the inside. The boy goes with a knife. While living in the house, his mother told her neighbor, aşağıda let's have tea in the pastry shop under the bunlar. Is she such a mother? Is there such a conscience? If the hand sees the hand with a knife inside, it tries to intervene.

Yesterday my daughter went to Sefaköy to meet with managers at work in Yenibosna. I have followed a minibus on the way there, a person who has followed up with a minibus, which is a tool that I do not know that Fatma is on this road. But he threatened to take the car. I have threatening messages on my daughter's phone. He said he bought a gun a month ago. They took this child from the house and gave it to their aunt.

He shoots my child and walks him for hours. He goes home and speaks to his relatives. They gather from there. They keep him calm. They are willing to deliver. At that moment, my child would be rescued if he went to the hospital. My child lives in the car, travels around. At the end of the two lawyers go to Halkalı Police Station and take delivery.

Fatma Erdogan's uncle Abdullah Aladag "22-year-old teenage girls, lovingly run away. They see a very serious attack as a result of his mother's return home. Take a cup report. The separation book is taken. She says to the door, she welcomes the things I do, she says the door is open, and the girl says "mother, does not mind opening the door, she threw me a small gun and saw such traumatic things."

Aladag "My niece went to work without fear, got out of fear. It was caught the last night on the road. Children in this neighborhood came in a way. Arrived at the car. Caught in the car by the gun. A lawyer picks up his friend, So the girl takes him down, means he likes his daughter's pain, has to talk to her mother and then goes to the police station with the body. You don't panic, the body says in my car. A few hours ago he shares his handcuffed photo on said his social media account and said I was coming back again.