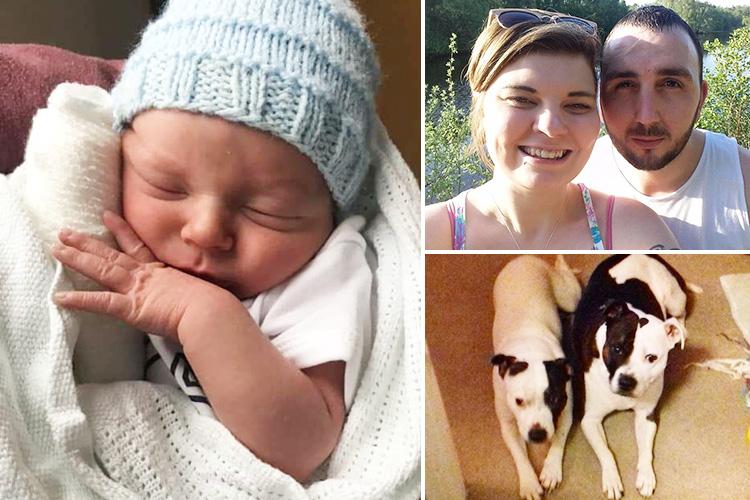 Mom and dad of a boy boy mauled by a Staffordshire Bull Terrier are "not terrible" parents, said his grandfather today.

Reuben McNulty, who was younger than a month old, attacked at 1.47 on Sunday at his family residence in Yaxley, near Peterborough.

The child is fighting for her life in Addenbrooke's Hospital in Cambridge.

Today his grandfather Paul Litchfield is described as a "freak accident" – after Reuben's unemployed parents Dan McNulty, 31, and Amy Litchfield, 28, were asked by police.

They are both now on Reuben hospital bed.

The reuben was attacked by one of their parents Staffordshire Bull Terrier dogs.

Mum Amy Litchfield, 31, was said to have doted on the animals and previously referred to them on Facebook as her "furr babys".

"By the end of the day, it's just a big freak accident and everyone is doing a big deal."

Mr. Litchfield added: "They have not done anything wrong and how it is portrayed at the moment, they are terrible parents.

"The bloody is not … they have been amazing. If they were awful parents, they would not be sitting with the young boy now.

"People need to realize that there are always two sides to the story.

"The thing is that there is a lot to play here for everyone, not just them, for us too, as a family."

The couple's two Staffordshire Bull Terriers, called Fizzy and Dotty, have been taken from the property and placed in police kennels.

A neighbor described the dogs as "evil".

The man said, "I have seen these dogs before and they are evil and will show their teeth at all."

Reuben's parents were arrested with suspicions of childcare and released on the castle until December 15th.

A police spokeswoman said: "We called the ambulance service at 1.47am (Sunday, November 18th) to an address in Yaxley, with reports of concern for grandchildren who had been attacked by a dog.

"Officers and paramedics participated in the scene and the child was taken to Peterborough City Hospital before being transferred to Addenbrooke's Hospital in Cambridge with life-threatening injuries.

"He is still in a critical state.

"A 28-year-old woman and a 31-year-old man, both from Yaxley, were arrested suspected of child abuse and have been bailed until December 15th.

"Two dogs, Staffordshire Bull Terriers, were taken from the property and are in police kennels.

"The police remain in place and an investigation has been launched."

Under British law, the law of dangerous dogs [1991] forbids four dogs to own or be bred.

Often confused with the forbidden Pit Bull Terrier breed, the Staffordshire Bull Terrier is NOT banned in Britain, although described by some as "dangerous."

The government advises the owners are against the law that any dog ​​should be "dangerously unscathed".

"Fake" homeless woman begging on the streets despite having an apartment

"I just started this for my children"

Dogs are considered dangerous out of control if they hurt someone or make someone afraid that they may be injured.

A person can face unlimited fines and / or sent to prison for six months if their dog is dangerous out of control.

A long prison sentence can be expected if their dog injures or kills someone.

The last dog hits in Britain

November 2016 – Aiden Noel, 19, had some of his nose demolished by a Jack Russell Terrier.

August 2016 – A three-year-old boy died after an American bulldog had injured him. Owner Jade Dunne, 29, received 12 months in prison for two years.

April 2017 – A one-year-old became a "tortoise" of a dog in Chatham who later became killed.

June 2017 – A young girl suffered from facial injuries after she was bitten by a husky.

November 2017 – A couple of pets Beagle was killed to death by two evil Mastiff dogs when released by the wire in a park.

December 2017 – A dog owner was imprisoned for four years after her Staffie mauled 12 children at a playground in Northumberland in May 2016.

February 2018 – A man whose bull terrier attacked and killed his neighbor was imprisoned for 10 years. The owner had ignored a court decision that required his dog to be muzzled, neutralized and held in general.