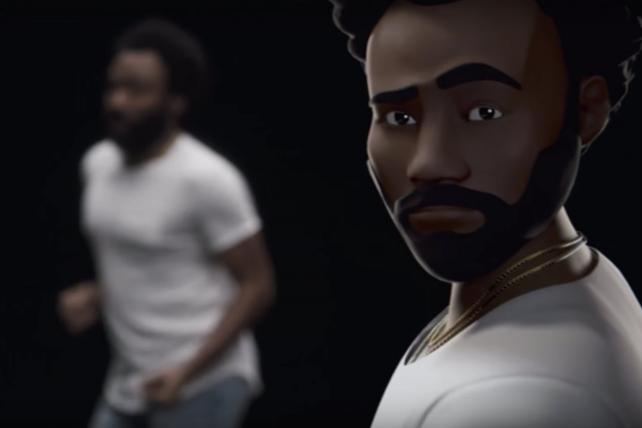 Welcome to Ad Ages Wake-Up Call, our daily orientation on advertising, marketing, media and digital news. You can get an audio version of this briefing on your Alexa device. Search for "Ad Age" under "Skills" in the Alexa app.

What people are talking about today
Childish Gambino won four awards at the Grammy Awards and Ariana Grande won one even though none of them attended the ceremony. At least we had their ads.

Grande starred in one of several Apple commercials for fancy animated emojis broadcast during Grammy's broadcast on CBS while Childish Gambino appeared in a competing ad for next-level emojis from Google's Pixel phone. (Like someone wrote on Twitter, "am I the only one who didn't know about a large weapon in emoji tech?")

Grande song, pony-tailed Apple avatar – a "Memoji" in the Apple parlance – belted out "7 Rings" song she allegedly hoped to perform at Grammys before she pulled out into a disagreement with the producers.

Meanwhile, Google presented its interactive "Playmoji" Pixel smartphones and its commercial star Childish Gambino, among others. Donald Glover doing a fascinating dance with his emojified avatar. Playmoji has an AR effect; as Google says, "you can add [Childish Gambino] For your photos or videos just point the camera and release it into the scene. "The ad was fun, with great dance movements (of course).

More from Grammys
The battle of the bright beer still rages, one week after Bud Light ran Super Bowl ads that attack rivals for their use of corn syrup. MillerCoors supported the country duo Brothers Osborne, who tweeted a picture of herself before Grammy's raising their Coors Light to bowl "the peasants bringing the brews and grub to the table," Ad Age's E.J. Schultz writes. It is an example of how MillerCoors defends itself from Bud Light's attack. "MillerCoor's communication strategy involves lining up the support of the farm belt, especially the corn industry," writes Schultz.

Also: Check out more Grammys ads here at Ad Age, including a new Pepsi ad from Cardi B, which won Grammy for the best rap album. She also gave a good performance and raped and jumped onto a glittering grand piano. Okurrr?

ICYMI
Sprint claims AT&T for false advertising, reports Ad Age's George Slefo. AT & T has replaced the LTE symbol on mobile screens with "5GE" – which gives an impression. The phones are entering the fifth generation of mobile technology, which is still not here yet. AT&T says E stands for "evolution", although some observers say it is misleading branding slapped on the old 4G LTE. Sprint asks the court to block AT&T from using that tag.

Meanwhile, T-Mobile has also criticized AT & T's movement – using snark, not the legal system. Last month, it sent a Twitter video of someone who placed a "9G" sticker on a phone screen covering the LTE logo. The subtitle read: "Not aware that it was so easy."

Just short:
Airbnb vs Paris: The city of Paris claims Airbnb to publish 1,000 rental ads that it considers illegal, and the city's mayor says that costume could cost Airbnb $ 14 million, reports from Reuters.

huh?: "The rapper Tekashi 6ix9ine, who was guilty of making sex films with a 13-year-old girl and recently accused of beating a long-time boyfriend, was in a violent violence against Valentine's Day commercial for a New York City chain of six stores, "The Daily Beast writes. That chain is Romantic Depot.

Top 5: Check out the top 5 most creative ideas of the week, including a couple you might have missed. (Have you seen the ad for the Taco Bell delivery that damn fun at the community's idealization of high performance strikes and "hardship"?) Watch the video from Ad Age's I-Hsien Sherwood and Max Sternlicht.

Quote of the day: "Getting people to put the word" orgasm "on a billboard in New York City was almost impossible. We were knocked down with tons and tons and tons of foreign suppliers." – Tara Lynch of Creative Agency Vitro, talks about a campaign for Astroglide personal lubricant. Read more by Ad Ages Megan Graham.

Today's ad: What about mermaids? They have been in a few ads lately, including two Super Bowl ads, for Bon & Viv Spiked Seltzer and for Sprint. Now there are male mermaids – who refer to themselves as "more-bros" – in a new ad for Gorton's Seafood, frozen food brand. Gorton is best known for its fisherman-in-a-yellow-raincoat mascot, but it has used the merm before. This time they are a bit smaller bridge and more in touch with their feelings, writes Ad Ages Jessica Wohl. Check out the ad and strategy behind it.