A number of new rules for hiring officials 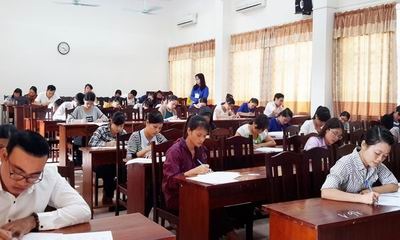 This decree instantly institutionalized a number of solutions proposed at the 6th central conference on 12 May. At the same time, he examined and refurbished the recruitment survey, civil service promotion and employee promotion towards organizing studies, practically, openly, transparently, closely monitoring and strengthening decentralization to ministries and branches, local, clarify the Ministry of the Interior's responsibilities for inspection, supervision, inspection and responsibility of agencies in the organization of examinations for promotion, securing public qualifications and capacity between ministries, branches and localities improve the use of information technology in the organization of recruitment studies, promotion exams, promotion exams …

Organization of 2 rounds of exam

When recruiting additional officials and officials, the decree stipulates that agencies, organizations and entities with recruitment powers must not impose conditions and standards contrary to the law. not to distinguish type of education, diploma, certificate, public school, non-public school.

In particular, the Decree amended and supplemented the content, the form, the process of recruitment and the selection process to simplify administrative procedures, increase advertising, transparency and quality improvement in recruitment. use, attach the authority to recruit employees with the power to use officials and employees and as required by the job title.

Recruitment of civil servants and civil servants is thus organized in two rounds, the first round of multiple choice tests on general knowledge, foreign languages ​​and informatics to ensure accuracy in exam and convenience at the exam. on the machine; 2nd round of the professional diploma in the form of interview, practice or written examination, which is determined by the head of the competent body.

At the same time, the deadline for taking steps to organize recruitment is set for shortening, simplifying administrative procedures.

The civil servant study also organized the simplification of procedures after 2 rounds equivalent to official controls.

Decentralize competence to organize official rank test examinations from main specialists and similarly down to ministries, branches and locations. The ministries, branches and localities decide on the list of qualified public employees and employees, conditions for participation in diplomas and take full responsibility in the process of conducting tests for public employment of employees according to their competence The Ministry of the Interior and the Central Organizing Committee only conducts management examinations to senior experts.

Priority in recruitment is regulated by adding priority points and applying uniform recruitment of staff and recruiting staff.

In the case of special employment, the specific rules on issues, standards, conditions and decentralization of authority for ministries, branches and localities follow (not to agree with the Ministry of the Interior or the Central Organizing Committee as before).

Specific provisions not to carry out the recruitment process for cases where officials and civil servants are subsequently transferred and transferred to other agencies, organizations and entities, now competent bodies The right to mobilize will be returned.

In the case of matriculation, apprenticeship time will be consistent with the level of education to ensure coherence between career fields.

– Officials agree to be transferred by competent bodies or entities to work with other agencies, organizations or entities in the political system.

– Officials who have given retirement or are subject to pay as provided for by law.

Decree No 161/2018 / ND-CP also decentralizes the management content of posts for civil servants and officials in accordance with the provisions of the local law and local law of 2015. and Resolution 21 / NQ-CP towards awarding ministries, branches and sites to decide on the list and number of posts for officials and civil servants.

To decentralize to the departments' managers, branches and localities (provincial level) to make special decisions on ranking and grading senior officials and senior or equivalent senior employees after having assessment statements on the standards and conditions of the Ministry of the Interior (for government agencies) or the Central Organizations (for the Party agencies and socio-political organizations).

The Supplementary Decree provides that the head of the public non-business entity is considering and deciding on the signing of a contract of employment to set the deadline for the official after the completion of the first employment contract to complete the employer. of Resolution 19-NQ / TW on the signing of a contract for setting the deadline for newly recruited officials (except those recruited to work in public non-business units in remote areas and areas with particularly difficult socio-economic conditions.

In addition, the decree amends and supplements the provisions of Decree 68/2000 / ND-CP in accordance with the spirit of Resolution 27-NQ / TW of the 7th plenary session on the seventh plenary on reform of wage policies with officials, civil servants, officials, armed forces and workers in enterprises : Implementing a uniform work contract scheme in accordance with the Code of Conduct (or service contract) with those who perform the task of performing and operating (requires lower level training).

Therefore, the decree stipulates that the civil service scheme cannot be applied to ministers or equivalent, so as not to sign employment contracts to perform professional and professional work in administrative bodies and administrative units. public industry.