The scientific faculty village is unique in Vietnam With 36 feudal scientists studying feudalism, Mo Trach Village has long been known as a unique scientific village in Vietnam … In 2008, the Vietnam Record Setting Council awarded Vietnam Record Record Cup to recognize the village Dr. Mo Trach with the highest number of doctorates in the country from XIV to XVIII century. This is also the homeland of many famous writers such as: Writer Nguyen Phan, Luong Quoc General Nguyen Son (whose real name is Vu Nguyen Uncle), his hometown professor, Vu Khieu Labor Hero …

On the outside, Mo Trach village (now belonging to Tan Hong municipality, Binh Giang district, Hai Duong province) is not much different from other villages in the North Delta region. But since ancient times, this place has been known as a scientific village. The whole area of ​​the eastern region (east of the ancient Thang Long citadel) still promotes the words: "The town of Read, the village of Nhu village, the word Chu village" (Chu village is the old name Mo Trach village). Students pass.

According to legend, Mo Trach village (named Nom is Chu Thuong village), the village offered the famous Thanh Hoang, Vu Hon. Perhaps this is why they are the largest family in Mo Trach with almost 90% of the population with this family name. Vu She, who is a Chinese man who is intelligent, who was 16 years old when he passed his doctorate, was sent to An Nam by the King of the Tang Dynasty and then made to the ambassador authority.

Being an astronomer – geography – feng shui, Vu Hon said the whole Hai Duong region is a good meeting, Duong A district is a burial school, and Chu Thuong village is a grave; Keeping the village as a place of origin will forever move on to the faculty board. Therefore, Vu Hon has joined the village with the original name Kha Mo Trang. Later, the Tran dynasty changed its name to Mo Trach, which meant the country's admiration. Because of the great merit of building the noble tradition of the descendants, Mo Trach's people worship and worship Vu Hon as the village's tributary god, who is also the ancestor of the Vu family here.

According to historical research materials, only from 1304 to 1754, in about 450 years, Mo Trach had 36 learned Confucianism, including 1 poinsettia and 11 royal palaces. The Vu family has an absolute majority with 9 royal armor and 20 doctors. And among those who passed this test were 1 minister, 4 deserved servants, 14 ministers, 5 officials …

Prof. dr.Sc. People's teacher Vu Minh Giang, Vice-President of the Vietnam Association of Historical Sciences, acting chairman of the Vu-Vo Vietnam Family Council commented: "Vu She greatly appreciates the study, he will be Good people must study. Therefore, he was the founder of The well-known tradition of this famous scientific village. 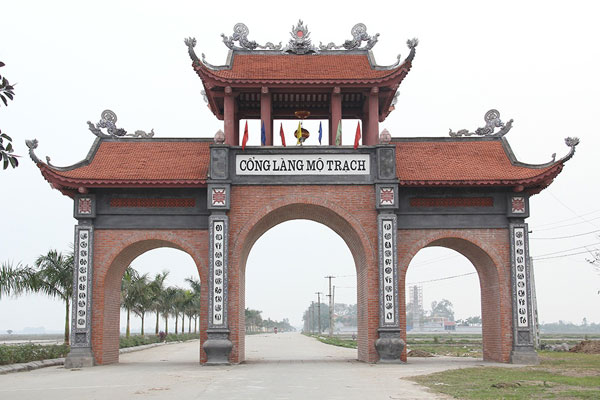 The academic tradition of the Mo Trach village extends throughout the feudal period, as a long-running cycle to this day. Opening the "doctoral yellow table" in the Mo Trach village is two siblings Vu Nghieu Ta and Wuhan Bi. The two men passed Thai students in Dragon Armour's year (1304) during King Tran Anh Tong's government and were used seriously because of their high integrity and integrity. Their father was Dong Giang Hau, General Vu Vu (vice general of Hoang Ton Tran Quoc Bao) with the victory of defeating the Nguyen-Mong army in the Bach Dang fight, and captured two enemy generals, O Ma Nhi and Phan Thiep. Since then, Mo Trach's scientific tradition has been enriched by dynasties in many dynasties, to Vu Huy Dinh, a doctor of Giap Tuat (1754) with a total of 36 doctors in Mo Trach village.

Mr. Vu Quoc Ai, standing member of the Mo Trach Village Management Board, considered "the living history of the village" shared: "Pyramid (1656) study under King Le Than Tong, the whole country has 3,000 people. In the competition, the king only took 6 people to pass his doctorate, where 3 people in the Mo Trach village were very young from 21-23 years: Vu Trac Lac, Vu Dang Long, Vu Cong Luong, later when you go through the examination history, King Tu Duc is good at the meaning, good at it political school, and the prize and rose pen is "Mo Trach is the best seller in the lower world" ie "Mo Trach Village is equal to half galaxy".

Vu Dang Huong, a soldier from the Mo Trach village shrine, added: "Only Trinh Trinh, Mo Trach had 17 people gone and worked as mandarins in court, so the people said," Mo Trach meets a city center meeting. capital ". That is not to mention the undergraduate and secondary school bachelor degrees.

According to Dang Khoa Luc's book, as Mo Trach village had many people gone, the court had doubts, so it secretly reviewed the investigation. The Department of Ky Hoi Exam in Vinh Tho (1659) King Le Than Tong's government chose the court a judge to make a difficult problem. Participants each had to sit in a deep hole to test. At each hole a cage was placed to separate, the judges sat on the tent to steer very close. At the publication of the results, the village of Mo Trach had four doctoral degrees named after the gold card name: Vu Cau Hoi, Vu Turn Hai, Vu Cong Dao and Le Cong Trieu; made the King very surprised, admired and used.

Mo Trach Village is also "buried" by Status Flag Vu Huyen (who only has 10 chess flags to help the king win the northern god of the country playing chess games in the middle of the sun to show water to the king through Sun's rays. Parasol), Vu Huu's status (which calculates the construction of the Thang Long city gate is not missing a brick and is also the author of the book "Making the law"), Vu Phong's status, Vu Cuong Tricks status and status The word Le Nai (poinsettia).

Previously, all the participants in the village who wanted to go to Kinh City to attend the exam were required to enroll in the village exam book and should definitely hand the test in Ky Anh Quan where the village was located. At this exam, the people of the village are responsible for examining and promoting their children to have capacity and quality before competing with the world. Thanks to a good tradition of education and hard work, Mo Trach's people have taken a brilliant gold table in court. Today, he mimics the tradition of his father's love of learning to be caring and attentive to the village's encouraging activities, by every family, but the generations of the descendants of Mo Trach are constantly studying, passing the achievement.

"From 2010 to now, although Mo Trach Village has 3,200 inhabitants, there have been more than 500 permanent college students. The list of excellent students at district and provincial level over the years of the village has also increased. From 1960 to now, the village has 11 doctors. "Villages, especially the Vu family, attach great importance to teaching their children to take care of their studies and exams. The councils were engraved on stelae in their church to pass on to the next generation of descendants," Ai said.

On the 8th day of the first month of the month every year, at the festival to celebrate the birth of Duc Than, Vu Hon – The village's tributary god and also the Vietnamese ancestor of the Vu-Vo family, the encouragement branch of the Mo Trach village and the Encouragement card study – Talent promotion Vo Vietnam Family Council to reward students and students with outstanding achievements in studying to encourage and encourage the young generation to follow the tradition of studiousness, science board of his father. The Can people have the opportunity to learn the languages ​​of other ethnic groups very quickly. They just have to listen.