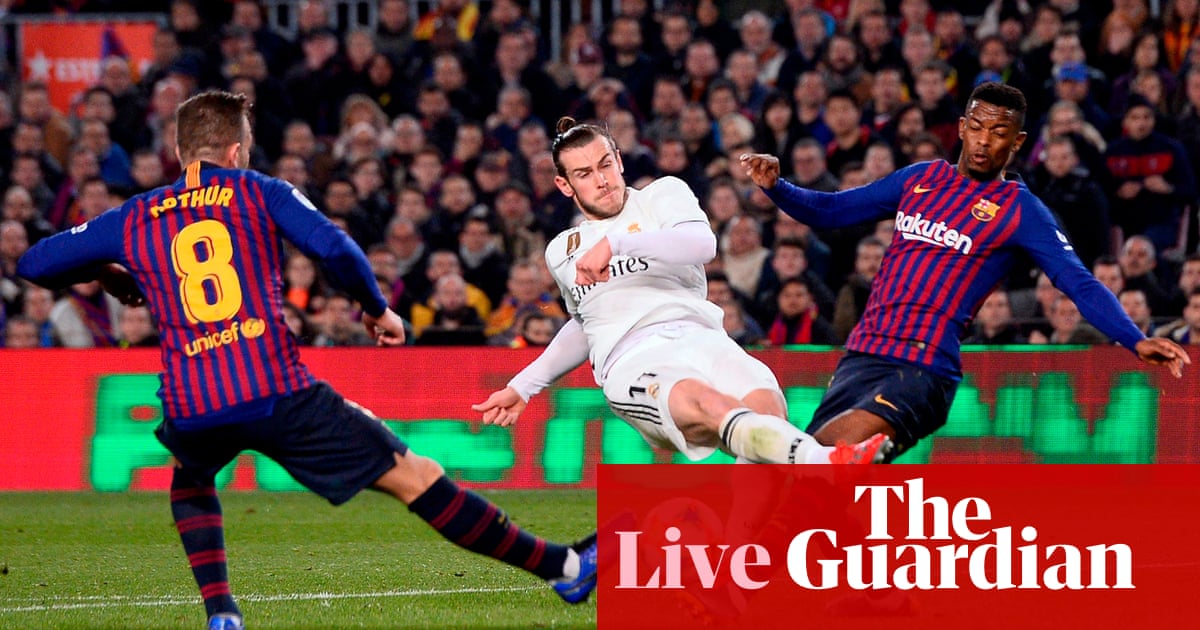 It's all from me. It was an excellent game, especially in the first half. Real was very impressive for an hour and created better chances to score a second, but faded with a combination of fatigue and the arrival of Messi in the last half hour. Thanks for being here. Goodbye!

The second leg will be played on the Bernabeu on the 27th and it will probably be decent.

90 + 4 minutes: And that's it! A high-quality, high-tempo game ends with spoils deservedly shared.

90 + 3 minutes: Jordi Alba's cross is a bit strong for Vidal, but he keeps it in play and pulls back to Suarez, whose volley from outside the box hits a defender.

90 + 1 min: Messi goes down the edge of the area again, but this time, Ramo's challenge was exactly – and may be.

88 minutes: Messi loses the ball on the edge of the Real area and Barcelona players compete to give away the free kick that stops Real's break. Busquets make the first mistake, but Real holds the ball and the referee waves waves. Vidal commits the other to Casemiro, and this time the referee blows his whistle.

87 minutes: Good print from Real, working for a while around the Barcelona area. Eventually the ball rolls to the edge of the area where Kroos runs on it, but Pique gets in the way of the shot!

85 minutes: Kroos kicks the ball into the box, but Varane mistimes jumps wide and the ball goes wide.

85 minutes: The night's final replacement sees Marco Asensio on the field for Llorente.

84 minutes: Semedo does well to win and keep the ball to the right, and then he pulls back to Messi, but Alena (I think) gets in the way and nothing comes of it.

81 minutes: What a chance for Real Madrid! Ter Stegen jumps from his area to win the ball, but it goes to Benzema, who immediately finds Bale, who takes too long to shoot, gives Ter Stegen the opportunity to drive back to his line and then hits a defender.

79 minutes: Suarez goes down the area with Carvajal behind him and looks guilty. It was an idiotic challenge, with Suarez right in the corner of the city line, and I think anywhere outside the area would surely have been a free kick. Here, however, the judge is not so keen.

77 minutes: A Barca ends with Alena, who gathers Messi's passport, but is immediately closed by two defenders. Had he succeeded in lifting the ball past them, Suarez was completely unmarked, but instead he tried to shoot, and Carvajal blocked.

Up to date
at

75 min: Sergio Ramos, who is already ordering, is late for Arthur. Free kick, but no other yellow.

73 minutes: Malcom has changed from right to left in the last 10 minutes and has become a little less influential.

69 minutes: Messi pickpockets Casemiro and hares targets. Vazquez cuts his heels on the edge of D, and Messi gets a decent shot from the free kick.

67 minutes: Messi runs past two people, but then runs straight into Varane. A moment later he has the ball again, with an easy pass available to play Suarez in, but he overheats it!

65 minutes: There's a little more swagger about Barcelona's games since their equalizer. Perhaps Real's healthy harrying is also slower as they get tired, which would help.

63 min: There is a magical roundabout on the touchline. Real take off Llorente who seems to feel a muscle tweak of some description, and bring on Casemiro. Also: Bale comes to Vinicus Jr and Messi for Coutinho.

63 min: Vidal replaces Rakitic. Messi is about to come on too.

62 minutes: Coutinho has another shot from outside the area, but it's right down the middle and Navas catches easily.

60 minutes: Alba was booked in pursuit of the goal, presumably to be bad for the judge.

58 minutes: The goal is! Jordi Alba was played to the left, but Navas came out quickly and blocked the shot. It returns to Suarez, miles out, without time, and from an impenetrable angle, and somehow hits the post! The ball returns to Malcom, with several defenders now on the line, but he beats them all from 15 meters!

Malcom celebrates! His teammates surround the judge! Is that a goal? Is it not? What happens? Who knows?

57 minutes: Another reservation, this time for Marcelo, who beat Pique after the ball had passed. There was very little contact, but the ball is very away.

55 minutes: Suarez clips Ramos as they run towards the ball inside the penalty area. He moves angrily at the referee after the whistle goes and is booked as a result.

54 minutes: The audience has greatly encouraged Messi''s introduction in a few minutes now. The big man seems to make his laces, which is encouraging.

53 minutes: Coutinho sends a shot wide just outside the box, where the ball looks and curls, but clears the crossbar over goal.

52 minutes: Arthur enjoys Modric on the edge of the Barcelona area, the Croatian middle shot when the ball disappeared and falls surprised after his foot has nothing but air (and perhaps a bit of the missing Arthur).

49 minutes: Barcelona has had much ball in these early minutes in the second half, but done absolutely nothing with it.

46 minutes: Jordi Alba has the ball on the left edge of the area. Carvajal closes him down and holds his hands behind his back to hold his arms by his side. Alba blows the ball into Carvajal and then has the gallows to demand a penalty.

Players gather in the tunnel in front of halfway. It does not appear that there will be immediate changes.

He had an excellent first half, but the scoreline could be even better for Real had he gone a couple of times instead of shooting.

"Has Ramos been booked yet? Or is he waiting for Messi?" Wondering Ruth Purdue. Oh, he was booked a long time ago and is ripe for another half, Messi-inspired red.

45 + 1 min: And it's half time. It has been an excellent half of high-tempo, hotly-contested football. Real probably started the better and could have scored more than once before Barcelona entered the game, but maybe they have settled before the break.

45 minutes: Modric commits Arthur, who makes it good to stay on foot and continue. So Modric commits him again. Arthur remains right again, but the judge has enough and blows his whistle. No yellow for the double whammy, though.

43 minutes: Nelson Semedo enters the judge's notebook to push Vinicius into the chest as he tried to change direction. A hard reservation, in my opinion.

41 minutes: Rakitic gives the ball away, wins it excellent, passes to Malcom, gets it back and gives it away again.