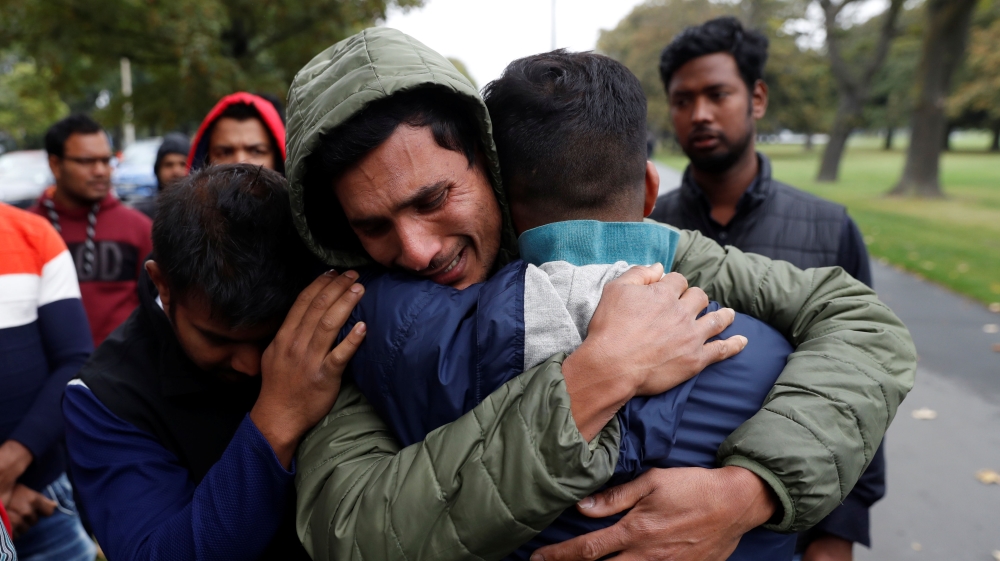 Christchurch, New Zealand – In a quiet corner of Memorial Park Cemetery, the tombs dug the dozens of Muslim worshipers murdered in the worst mass shooting in New Zealand's modern history, stretching out in all directions.

Around them sit highs of excavated soil waiting to fill in the holes carefully carved out of the ground.

Other places, mournful mOthers and fathers, sisters and brothers, daughters and sons are also waiting.

More than 48 hours after a suspect's star has killed at least 50 people during what has been labeled a terrorist attack on two Christchurch mosques, relatives of the missing and suspected dead are raised by anxiety, desperately putting their loved ones to rest .

"I haven't slept for two days," said 31-year-old Farhana Akhter outside a trial center for Christchurch victims, a city home to a few thousand Muslims.

"I can't eat or drink, I'll see my aunt's body as soon as possible … so we can get relief."

Akhter's relative, Husna Ahmed, was among the more than 40 people who were shot dead on Friday at the Al Noor Mosque in central Christchurch – one of the two worship sites that were attacked, the other was the Linwood Mosque, about seven kilometers away.

A 28-year-old Australian man, identified as Brenton Harrison Tarrant, has been charged with a number of murders, with many more expected.

In his own words, published in a striking, racist and overtly white-supremacist online manifesto minutes before the attack, the suspect said he had decided to "commit violence against non-whites and immigrants, claiming they were destroying social cohesion .

"She saved everyone's life, but unfortunately she sacrificed her life."

Farhana Akhter tells Al Jazeera about his aunt's courage during the mass shooting of two mosques in Christchurch on Friday. pic.twitter.com/yz9WWVgj5G

Husna, 45, participated in Friday prayers as usual, when the gunman armed with semi-automatic rifles and large capacity magazines stormed the Al Noor mosque and opened fire differently on all the inside.

"My aunt, she was ushering all the ladies to make sure they all came out," says 19-year-old Nusrat Alam, another niece of Husna.

"She came back to look for my uncle, who's disabled, and that was when she was shot by the gun," she adds.

"It's a very big step to seeing the body. Many other people are also frustrated like us."

New Zealand authorities have not made official public statements indicating the victims, but have promised to move as quickly as possible to returning organs to the victims' families, while emphasizing the need for accurate identification and evidence collection.

New Zealand Prime Minister Jacinda Ardern said some bodies would be returned to the victims' families on Sunday evening and expressed hope that all those killed would be with their family again by Wednesday.

Arder's comments came after Mike Bush, New Zealand police chief, said officials were "aware of the cultural and religious needs" of Muslim victims, identifying and releasing organs as "quick and sensitive as possible".

Muslims are usually buried within 24 hours of death. Before their funeral, the organs are washed and wrapped in a white shelf so that funeral beans can be performed.

The delay enforced following Friday's tragedy is deeply traumatic, but understandable given the scale of the attack, says 44-year-old Waleed Washsh on the outskirts of a public vigil at the Al Noor Mosque.

"It is still difficult for many people to not see their loved ones and the dead bodies, even to trust that they have gone away, " Washsh, who lost three friends in the attack.

"But we have great confidence that the government and their agencies are doing their very best and they work around the clock to get the identified names. "

Help also comes from other corners.

Family members, members of the Muslim community, and others have traveled to Christchurch from various locations across New Zealand in an effort to help as volunteers in the aftermath of the mosque attacks.

Javed Dadabhai, who says his cousin Junaid was murdered Friday, is one of them. He flew down from Auckland, New Zealand's largest city and home to most of the country's 50,000 Muslims.

"My cousin was a beautiful soul, he was very softly said and a very kind person. He was just mild" Dadabhai, 30, says.

"He expressed it in all parts of his life," he adds.

Now Dadabhai is part of a team that helps organize the release of Junaid and the bodies of others and eventually their funerals. He says it could take up the volunteers who coordinate with the authorities for up to a week.

"The families have been so patient about how long this process has taken" Dadabhai say.

"From the Islamic point of view, there was a willingness to receive the dead immediately and start the mourning process … but they realize that this is not like any other incident, especially in New Zealand … so it is a stop-start to the family's mourning process – they will start it, but they will also be stopped"he adds.

"Hopefully, however, it will be better as the names [of those killed] Beginning to be released to the families, you can see they feel they are finally allowed to cry, to release some of their grief. "